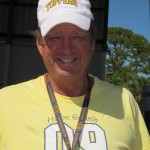 “Swish” is the sound of a bright orange basketball gliding into a net. This happens often every year for third through fifth graders at Hobe Sound Elementary, who want to enjoy themselves in a sport they like with other students.
Basketball at this school has taken place every year for the past 23 years. One of the reasons for this is Coach Dan Warner.
Coach Warner is generous enough to give the less-experienced players a chance to prove themselves on another court with lower nets so they can help their team dribble their way to victory.
To get extra points for a team (in addition to the baskets) kids on that team can put on kneepads for safety. Coach Warner says he loves to see kids trying their best on either court.
The games are about an hour long, and its a great place for the whole family to come and enjoy their kids’ efforts (or maybe to give them some pointers).
There are many basketball teams–10 to be exact–and their names are the Heat, Magic, Spurs, Lakers, Celtics, Pistons, Knicks, Suns, Hawks and Bobcats.
The point system is the same as any basketball game. A shot within the half-court line is worth two points, and a shot outside the line is worth three points.
Sometimes when all the games are completed, two or more teams have the same amount of wins and losses. Those teams will go to a little championship to determine the winner.
At presstime, the Heat is ahead and may be this year’s overall winner.
The next season starts in mid-September 2011 for the 24th year of basketball at Hobe Sound Elementary.