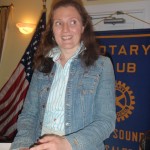 Katya Salamatina, of Moscow, Russia, attended a recent Hobe Sound-Port Salerno Rotary Club meeting to talk about today’s Russia. She gave the Rotarians a glimpse of everyday life as an “ordinary” Russian citizen. “We invited her to speak because Rotary is an international club,” said Doc Buchanan, club president. “We have a great deal of interest in international affairs.”

Salamatina, 35, was born and raised in Tula, south of Moscow, which is world-renowned among collectors for its weapons factories. She was educated in the United Kingdom, and now is a marketing and pubic relations consultant for large American firms, such as Amway, who want to do business in Moscow, where she currently lives.

She came to the United States initially to visit her cousin in Rhode Island, then was invited to this area in December by Olga and Larry French, a member of the club. It was not her first trip to the US, however. She had been here previously as a foreign exchange student.
“We were in Port St. Lucie at the time,” said her aunt, Olga, “and she fell in love with Florida. It is warm here.” It was her aunt who had arranged the original student exchange to bring her niece to the US. “That’s something I think is very valuable,” she added. “We should have more exchanges like that.”

Indeed, Rotary Club International, coordinates hundreds of student exchange visits annually, where young students may apply to visit another country, staying in the home of a Rotary member in the destination country and attending school there for up to one year. The parents of US students seeking to participate in an international exchange need not be Rotarians themselves in order to qualify. In turn, the international students coming to the US stay in the home of a Rotarian in the US.

This international cooperation among Rotary Clubs enables the program to keep its costs low, and has arranged successful exchanges between the US and more than 80 other countries over the past 25 years. After Salamatina’s visit with the French family, she embarked on a two-week Caribbean cruise with multiple island stops. “We got such a good deal. She got a second week for the same as the price of one,” said her aunt. “As soon as she returns to Florida, she hops on a plane to Rhode Island, then goes home to Russia, but she was so, so excited about a chance to see the Caribbean.”